As the threat of war breaking out between Japan and the United States became unavoidable, Hibi donated fifty paintings to community venues in Hayward, stating "There is no boundary in art. This is the only way I can show my appreciation to my many American friends here."[2] Despite these efforts, very few prewar works exist. After Executive Order 9066 was signed by President Franklin D. Roosevelt in 1942, setting the mass incarceration of Japanese Americans off of the West Coast into motion, Hibi and his wife were moved to the Tanforan Assembly Center in San Bruno, California. Once the couple were settled, Hibi helped organize an art school in collaboration with artist Chiura Obata, structuring the curriculum on the mode of the California School of Fine Arts. After the Hibis were moved to a more permanent camp in Topaz, Utah, in 1942, a similar fine art school was set up for the incarcerees, offering instruction in sketching, watercolor, sumi-e, oil painting, and other technical workshops. The Topaz Art school also exhibited the work produced in camp. Some of Hibi's paintings and woodblock prints from the Topaz period, featuring the snowy barracks, desert landscapes and wolves circling the camp, are among his most well-known and respected. Following the medical release of Obata from Topaz in 1943, Hibi continued as the director of the art school for over two years.

Hisako Shimizu Hibi (1907–91) was an Issei painter and printmaker who exhibited throughout her career, and by the end of her life she was well entrenched in the San Francisco Bay Area arts community. She was born on May 14, 1907, in Torihama, a farming village near Kyoto, Japan, and moved to San Francisco, California, in 1920. After graduating from Lowell High School, she decided to remain in San Francisco to pursue her art studies, although her parents returned to Japan in 1925. Hibi studied western-style oil painting at the California School of Fine Arts and participated in annual exhibitions at the San Francisco Art Association. While at the school, she met fellow student and painter George Matsusaburo Hibi, who was more than twenty years her senior, and the two were married in 1930. 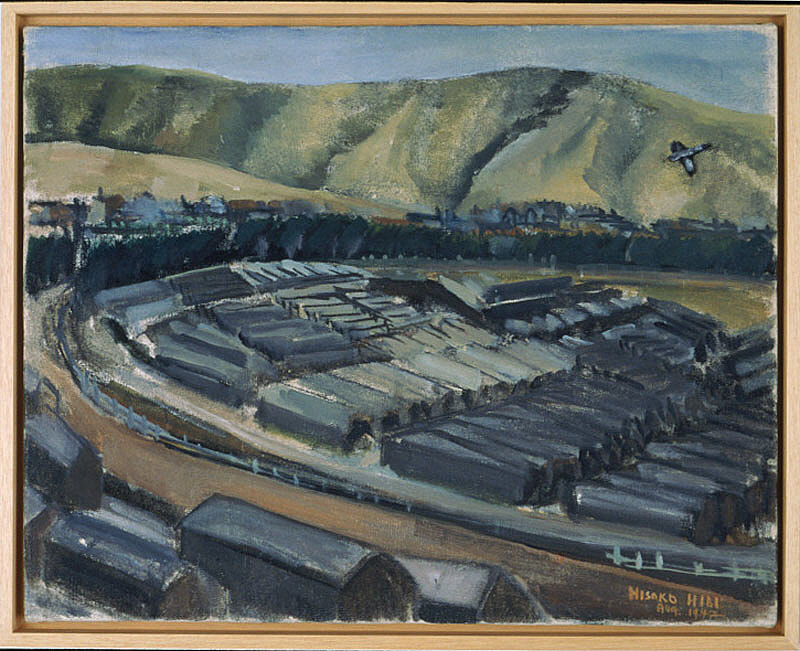 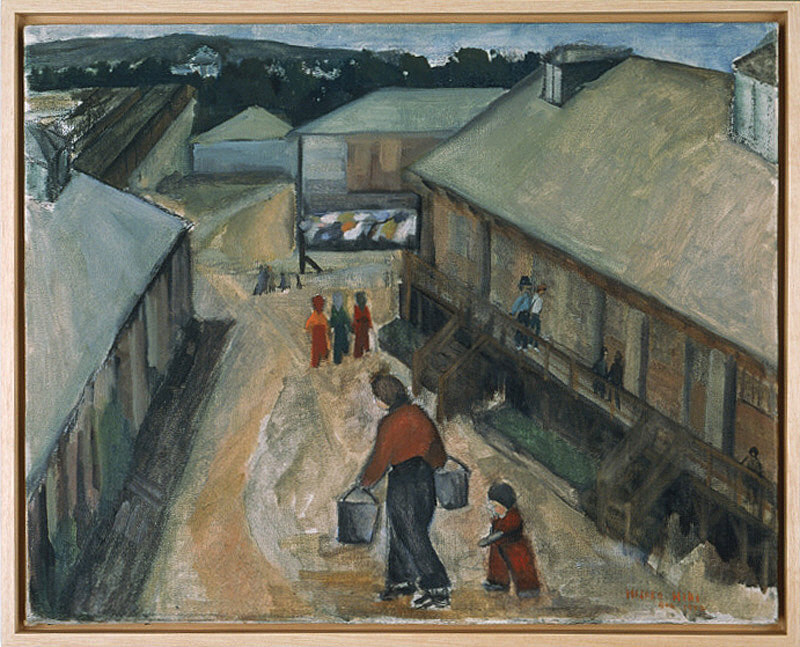 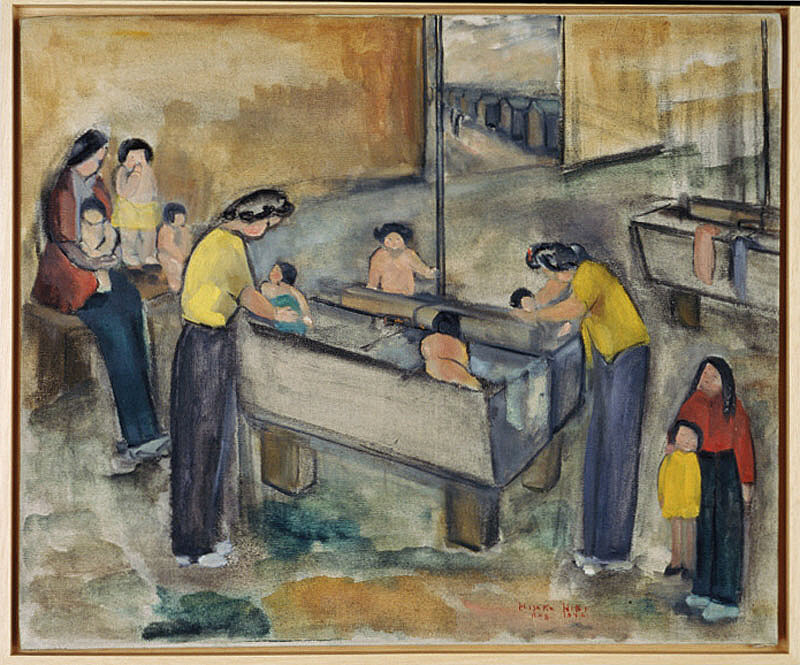 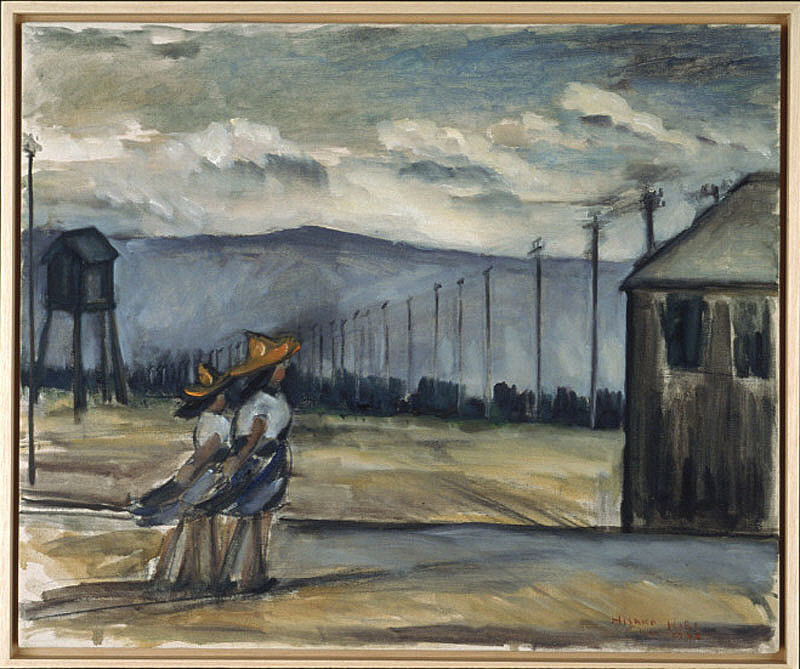 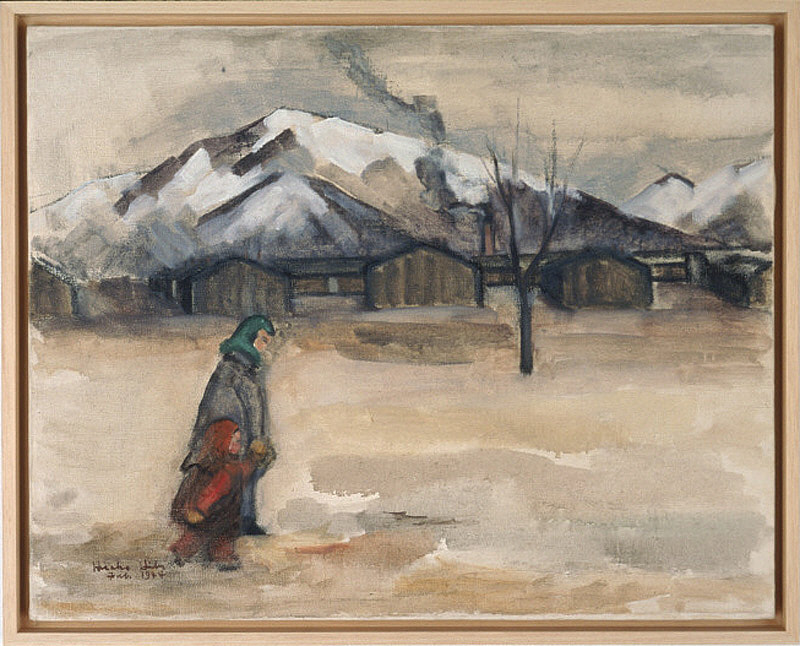 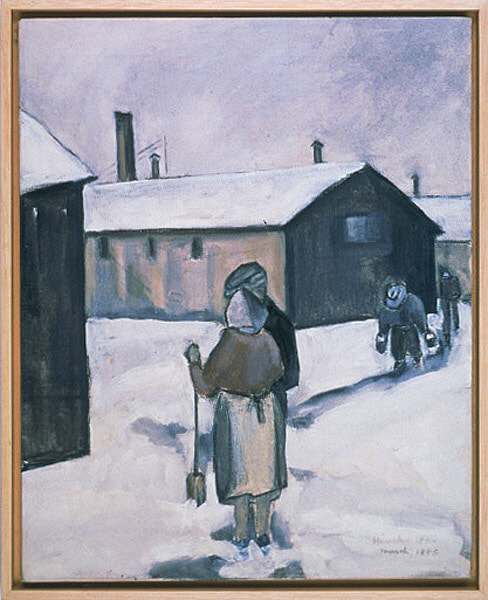 In Spring 1942, Obata and his family were removed from Berkeley under Executive Order 9066. He was forced to close his studio, and his artworks were stored by UC Berkeley president Robert Sproul. The Obatas (except for Gyo, who relocated to Washington University in St. Louis) were confined at Tanforan. There Obata and his friend George Matsusaburo volunteered to create an art school for inmates, which enrolled over 600 students. Miné Okubo served as one instructor. When the inmates were moved to the Topaz camp in Fall 1942, Obata and Hibi recreated the school there. In addition to teaching, Obata did hundreds of watercolors and sketches of the journey to camp and confinement experience. In addition to aesthetic value, these were designed to document the experience, since inmates were refused cameras. He also contributed drawings to the Topaz Times newspaper. Meanwhile, Obata did large-scale paintings of the desert landscape surrounding camp. In May 1943, representatives of the Japanese American Citizens League were received at the White House by First Lady Eleanor Roosevelt. They presented her with an Obata landscape, Moonlight Over Topaz, as a gift for the President.
Although Obata remained popular with his art students, his pro-American political stance alienated a faction of dissident inmates. In April 1943, a nighttime assault left Obata hospitalized. As a result, he received permission to leave camp, and resettled his family with his son Gyo in St. Louis, where he worked for a commercial art firm. Two years later, following the end of the war, the elder Obatas returned to Berkeley, where they were able to find a home and retrieve their artwork. Chiura Obata resumed his painting and teaching, and presented a show of his wartime art at UC Berkeley in 1946. In the following years, he participated in numerous shows. After his retirement from teaching in 1954, Obata led art tours of Japan. He published the instruction booklet Sumie (1967) and the guidebook Through Japan with Brush and Ink (1968).

Miné Okubo (1912-2001) remains best known as a narrator and artist of the Japanese American camp experience, most famously in her 1946 book Citizen 13660, a graphic memoir of her confinement at Tanforan and Topaz. However, Okubo considered herself first and foremost a painter, and she devoted seven decades to perfecting her art.

Early Life and Career
Miné Okubo was born in Riverside, California, on June 27, 1912, one of seven children of Tametsugu and Miyo (Kato) Okubo. According to family lore, Miyo Okubo had been an honors graduate of Tokyo Art Institute who was sent to the United States by the Japanese government to work as a calligrapher in the Japanese Arts and Crafts Show during the 1904 St. Louis World's Fair. Miné later recalled that her mother used to paint at home, and always encouraged her seven children to pursue artistic careers; Miné added nevertheless that her mother often lost patience with her early efforts at art because Miné could never copy anything precisely. After Miyo died in 1940, Miné paid tribute to her with the painting "Miyo and Cat," which portrayed her with Bible in hand. Another artistic influence was Miné's oldest brother Benji (Bunji) Okubo a pioneering Nisei painter and a director of the Art Students League in Los Angeles. Miné's older sister Yoshiko Okubo (Tanaka), an artist and gallery manager, was arguably the strongest influence on her developing career. 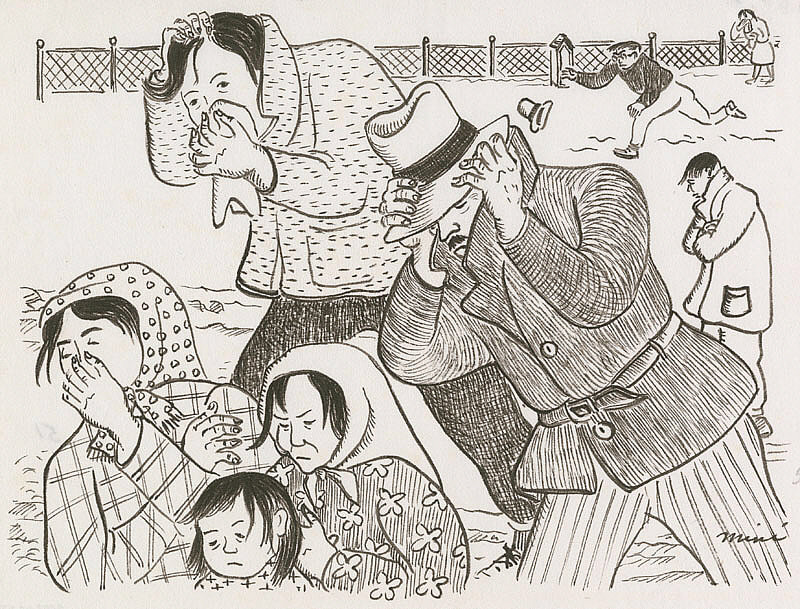 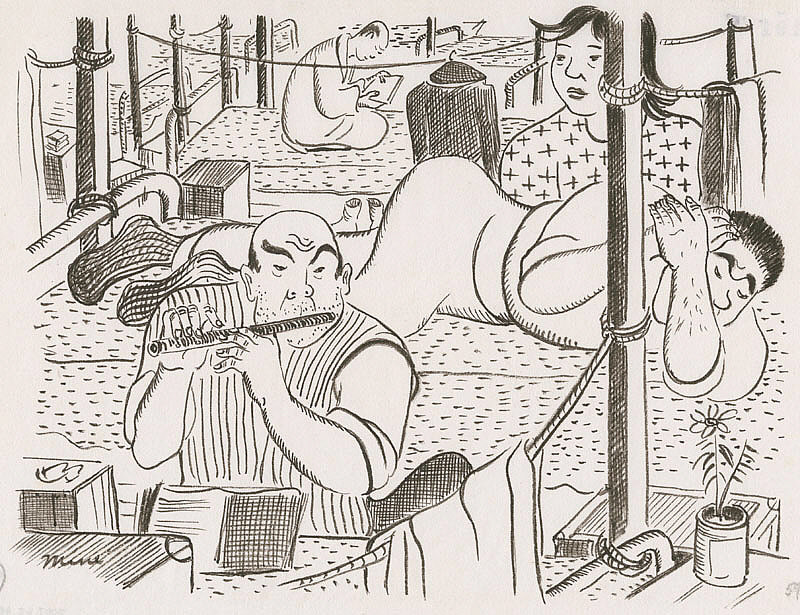 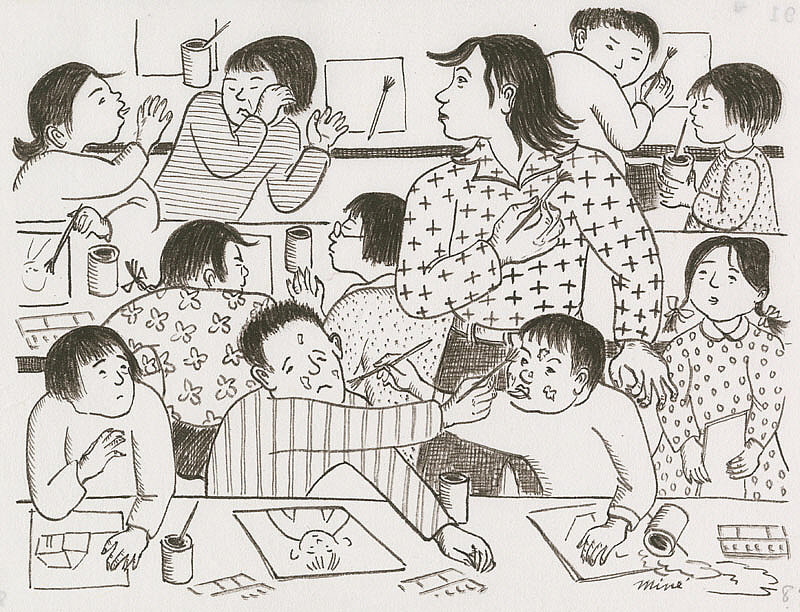 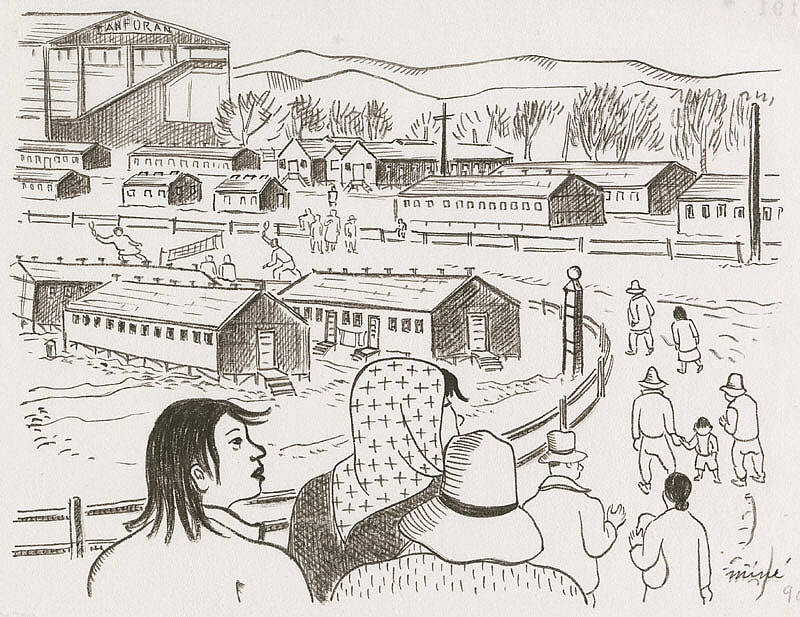 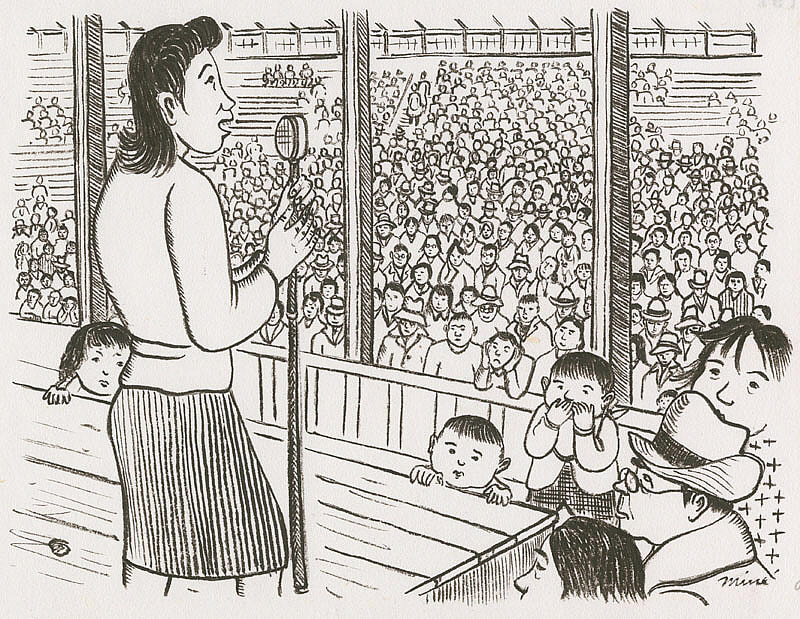 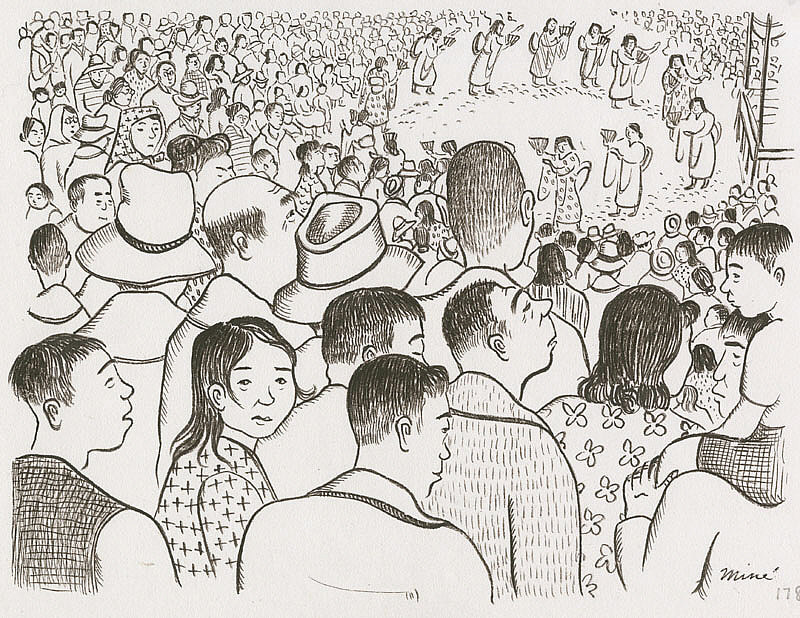